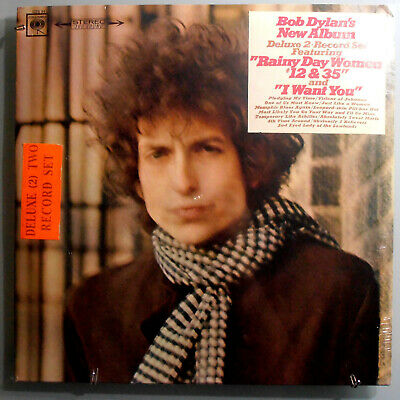 <img src= http://pics WE CURRENTLY HAVE  MORE THAN 300  LISTED ITEMS


·       GUARANTEED ORIGINAL RED AND WHITE "360 STEREO SOUND" COLUMBIA LABEL , SUCH AS THE ONE SHOWN BELOW, FROM OUR PREVIOUS AUCTION .

·       THE THICKNESS OF THE VINYL, THE APPEARANCE AND THE CONSTRUCTION OF THE COVER, LABEL’S LOGO AND OTHER PERIPHERAL ELEMENTS OF THE COVER, ARE ALL PERFECTLY CONSISTENT WITH THE ORIGINAL, FIRST PRESSING OF THIS TITLE.

·       THIS IS THE ORIGINAL, AUTHENTIC, FIRST U.S. PRESSING; THIS IS NOT A REISSUE, AN IMPORT, OR A COUNTERFEIT PRESSING.

·       SORRY, WE CANNOT GUARANTEE THAT THIS IS THE RARE ORIGINAL VERSION OF THE COVER WITH CLAUDIA CARDINALE PHOTO INSIDE OF THE GATEFOLD.

(►PLEASE SEE THE IMAGE OF THE COVER, LABEL OR BOTH, SHOWN BELOW)
(Note: this is a REAL image of the ACTUAL item you are bidding on. This is NOT a "recycled" image from our previous auction. What you see is what you’ll get.  GUARANTEED!)

Here it is, ladies and gentlemen: THE STILL SEALED ORIGINAL PRESSING of the King of all singer-songwriters albums, Bob Dylan's very finest hour and one of two or three most important, creative, subversive, ingenuous, inspired and mind-intriguing albums ever - EVER - recorded. Just listening to the bouncing, cascading rhymes of Bob Dylan's surreal poetry sung over jazzy, bluesy, folksy and rocking instrumental backing (provided courtesy of Al Kooper, Mike Bloomfield, Robbie Robertson, The Band and some of the finest studio musicians of the day) makes our heart skip a few beats. Track listing?!?!  Aw, c’mon…do you really need one? Finding a still sealed original copy?!?! Forget it – not even a HOPE!!! This may be the last one you will ever see.

If Highway 61 Revisited played as a garage rock record, the double album Blonde on Blonde inverted that sound, blending blues, country, rock, and folk into a wild, careening, and dense sound. Replacing the fiery Michael Bloomfield with the intense, weaving guitar of Robbie Robertson, Bob Dylan led a group comprised of his touring band the Hawks and session musicians through his richest set of songs. Blonde on Blonde is an album of enormous depth, providing endless lyrical and musical revelations on each play. Leavening the edginess of Highway 61 with a sense of the absurd, Blonde on Blonde is comprised entirely of songs driven by inventive, surreal, and witty wordplay, not only on the rockers but also on winding, moving ballads like "Visions of Johanna," "Just Like a Woman," and "Sad Eyed Lady of the Lowlands." Throughout the record, the music matches the inventiveness of the songs, filled with cutting guitar riffs, liquid organ riffs, crisp pianos, and even woozy brass bands ("Rainy Day Women #12 & 35"). It's the culmination of Dylan's electric rock & roll period -- he would never release a studio record that rocked this hard, or had such bizarre imagery, ever again.

(EXCERPT FROM AN ONLINE REVIEW BY STEPHEN THOMAS ERLEWINE, ALL MUSIC GUIDE  /ALLMUSIC.COM/)


THE FOLLOWING IS THE HISTORY OF THE COLUMBIA STEREO PRESSINGS OF THIS ALBUM:

(3)            Third  version, in print between 1970 and about 1974/75). Thick cardboard gatefold covers; Bob Dylan (not Claudia Cardinale) photo on the inside gatefold; Red Columbia label with yellow print along the label’s edge (70’s style) . Original catalog number on the cover.

(4)            Fourth version, in print between 1975 and cca 1981: Thin paperboard gatefold covers; Bob Dylan (not Claudia Cardinale) photo on the inside gatefold; Red Columbia label with yellow print along the label’s edge (70’s style) . Different catalog number on the cover. No bar code on the back cover.

(5)            Fifth version, in print between 1981 and 1989: Thin paperboard gatefold covers; Bob Dylan (not Claudia Cardinale) photo on the inside gatefold; Red Columbia label with yellow print along the label’s edge (70’s style) . Different catalog number - OR NO NUMBER AT ALL - on the cover. Blurry images on the cover; Bar code on the back cover.

Based on the appearance of this album, we are reasonably confident that this is one of two first pressings (1 & 2) described above, but in any event, DEFINITELY the original "360 Stereo" pressing of the vinyl

(IMPORTANT NOTE: unless otherwise noted, ALL records are graded visually, and NOT play-graded!; we  grade records under the strong, diffuse room light or discrete sunlight) 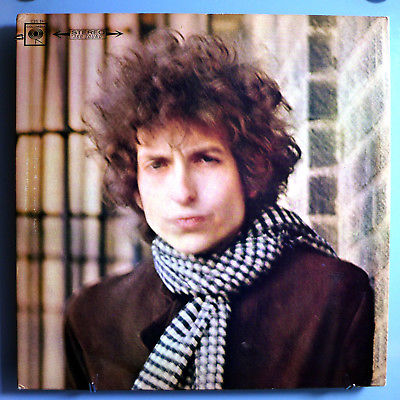 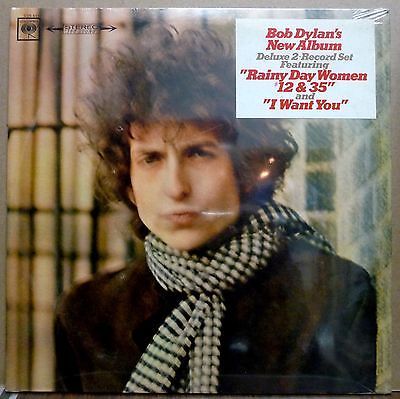 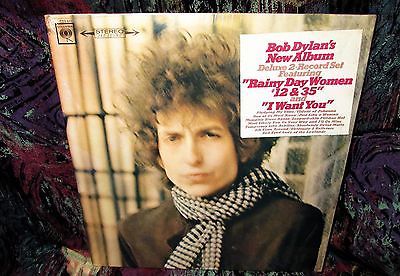 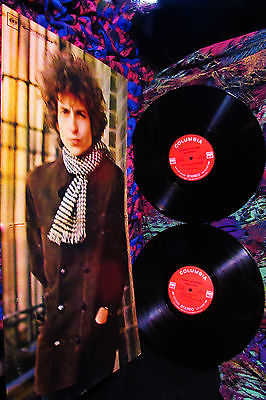 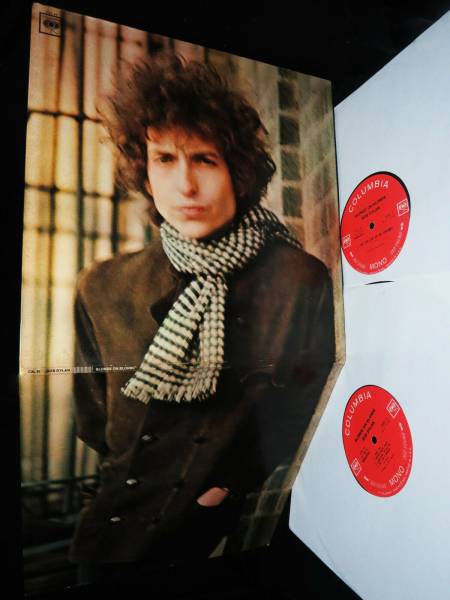 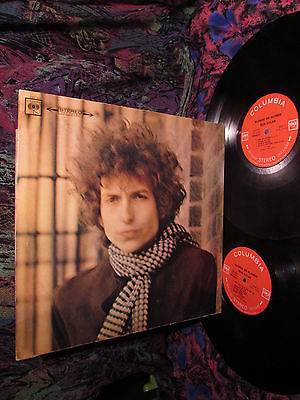 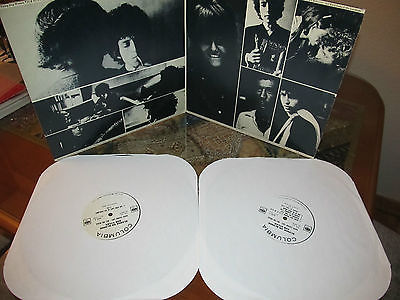 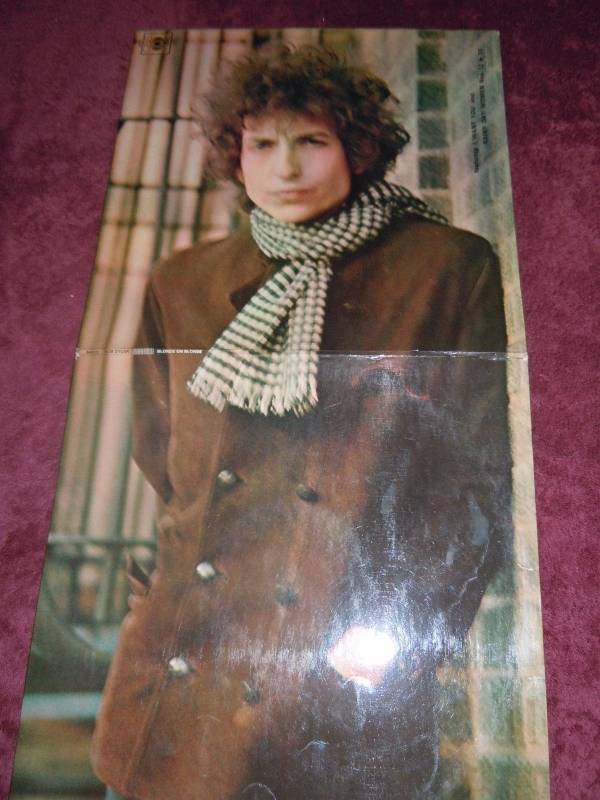