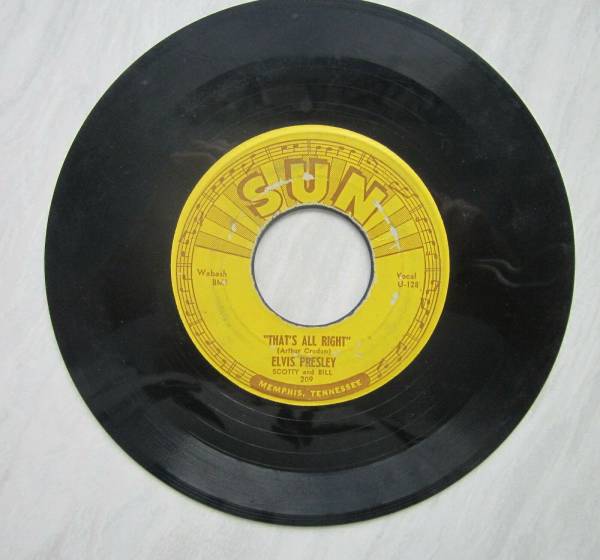 
Good condition overall,  but it plays brilliantly---------typical sounds from the records produced in the 50's
Please dont think that the record is scratched----------it  isnt ----shadow marks from when I took the photos
This was in my bank safe deposit box with the other 4 until Today
THE HOLY GRAIL OF ELVIS RECORDS------the 5 SUN ORIGINAL 45s

It all started in 1953 when an 18-year-old named Elvis Presley walked into Sun Studios to record “My Happiness” for his mother at a cost of $4.00. At least that is how the legend goes. According to the folks at Sun, he came in to hopefully be heard by Sam Phillips. In late 1954 he was invited back by Sam Phillips to record with Scotty Moore and Bill Black. The first hit was “That’s Alright Mama”.
There were four more releases before Sam Phillips sold Elvis’ contract to RCA. Who would have known back then to have saved those old Elvis Sun Records? Who could have possible known that they would become the holy grail of record or Elvis collections? Today there seems to be a frenzy to obtain an original piece of what is arguably the most important of rock and roll records. I have watched the value of a mint “That’s All Right” go from $150 twenty years ago to $8000 plus today. It is no wonder that there are so many counterfeits out there.
Since the advent of eBay, I have seen dozens of fakes get passed off as genuine. And I have seen genuine ones get sold by a seller who is convinced that they are fake !!. This guide is designed to help you distinguish the real ones from the bootlegs.
For what ever reason, there seems to be a lack of printed material on authenticating Sun records.
My expertise has come from many different sources over many years of collecting.
Authenticating
The Elvis Sun records were originally, it was thought, pressed in a plant in Memphis, and in a plant in Los Angeles, California. It is rumoured that there was a third release of the originals, pressed in Philadelphia which are identical to the California pressings.
All pressings have serial numbers etched into the trail-off. The records are Sun #209 "That's All Right" (1954), #210 "Good Rockin' Tonight" (1954), #215 "Milk Cow Blues Boogie" (1954), #217 "Baby, Let's Play House" (1955) and #223 "Mystery Train" (1955). The rarest issues are 209 and 215, then 217, while 210 and 223 are considered to be easier  to find. The first four records have engravings in the trail-off that end with the number 72. The fifth, Sun 223, “Mystery Train”, ends with the number 20.
The Memphis pressings, except for “Mystery Train”, have three ¼ inch circular  push marks around the centre hole, forming a perfect triangle, or Greek “Delta”. Hence, the name “Delta pressings”. These marks are not found on “Mystery Train”, nor on the Los Angeles or Philadelphia pressings. It is this lack of “push marks” that may cause original Suns from the other plants to mistakenly be wrongly identified as “fakes” or “bootlegs”. Also, misinformed or unscrupulous “buyers/sellers” have claimed that the 72 denotes the “year of issue” out of ignorance or to use lower prices.
The Los Angeles and Philadelphia pressings are identical to the Memphis pressings, except for the push marks, and the Philadelphia pressings, we learn , can be further identified by a tiny “MSI” stamped into the vinyl, supposedly for “Memphis Sun Inc.”. The California pressings have a small triangle etched into the vinyl near the record label.

All 5 records have been verbally guaranteed to me as original by Scotty Moore and D J Fontana, when I met them in 1993. Their words to me were ‘these are the real deal’. A lot of the information above came from them.
VITAL

The most certain way of distinguishing the original 1950’s issues from subsequent re-issues is to look at the last two digits of the serial number in the trail-off---------the72 on the first 4 Suns and the 20 on the fifth one.  On the originals, the last 2 digits are approximately half an inch from the other digits.  On the re-issues, the distance is doubled, to well over an inch.
This is the most important factor in distinguishing the original Suns, NOT the push marks.
So, LOOK before you buy,  but bear in mind, that not all sellers are crooks 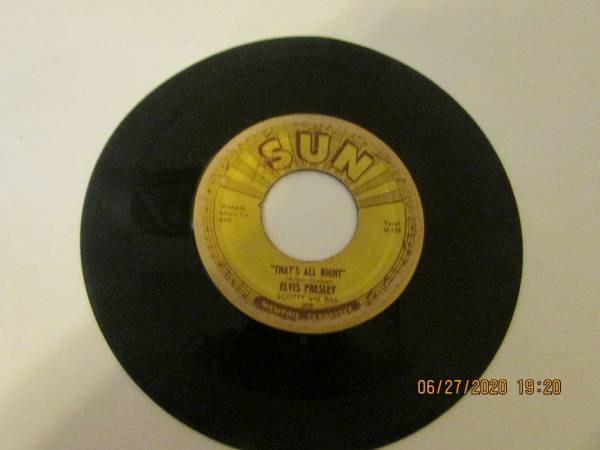 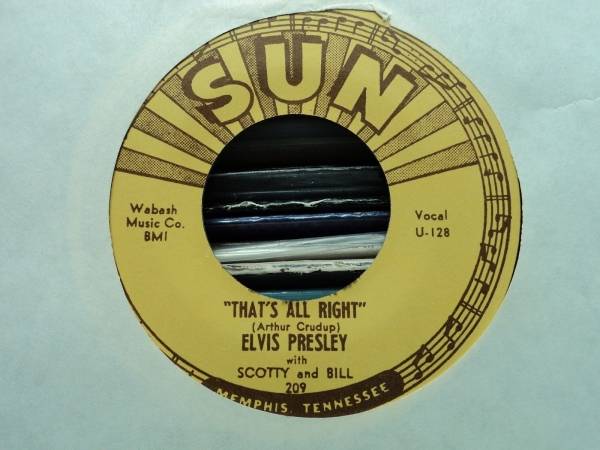 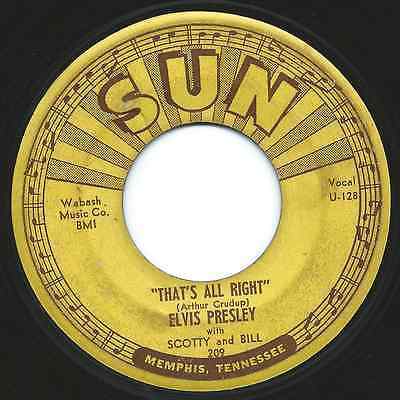 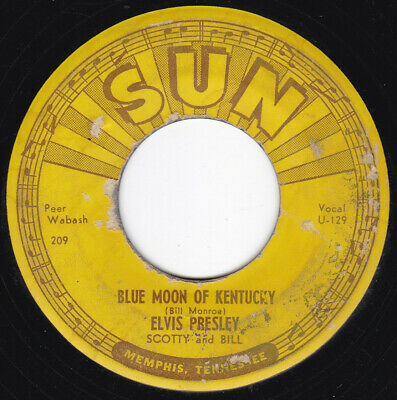 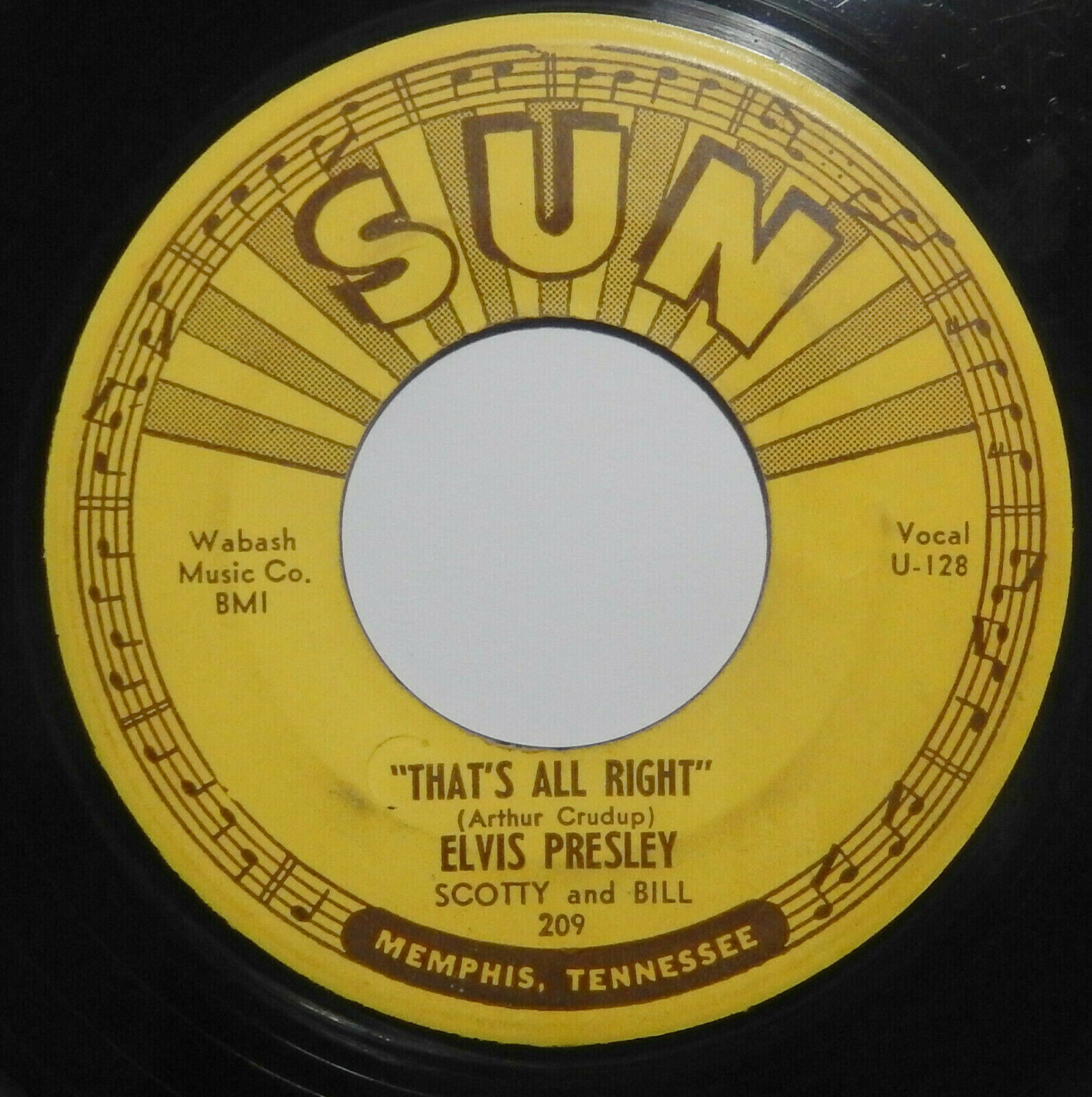 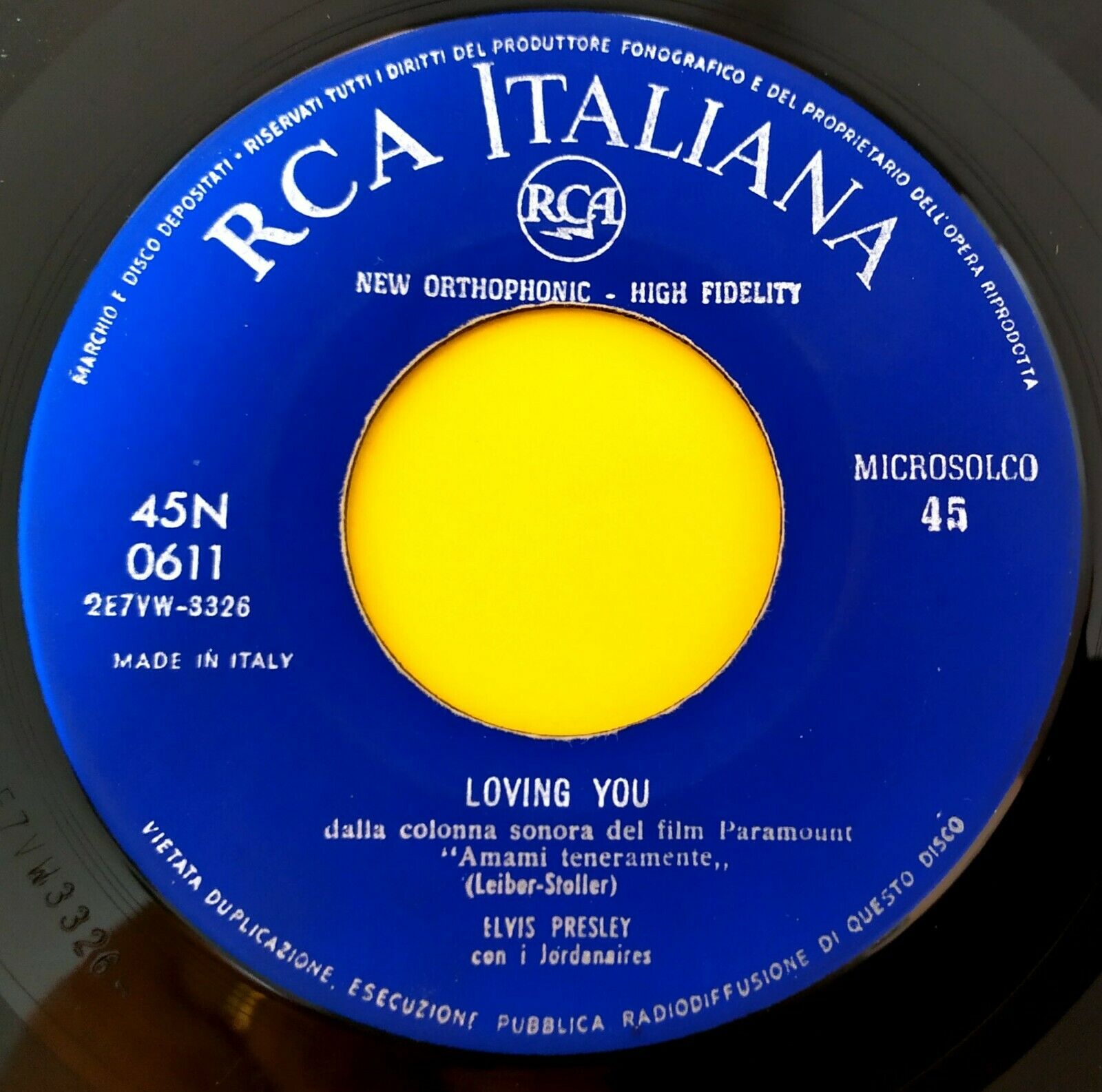